Todd Heidgerken is the first to note that long-term water planning isn’t a profession suited to anyone expecting immediate gratification.

As evidence, he pointed to this week’s landmark decision regarding where to build a 30-mile pipeline linking 300,000 current and future Washington County residents with treated drinking water from the Willamette River Treatment Plant in Wilsonville.

And even now that a preferred pipeline route has been identified, it will be more than a decade before Willamette River water begins flowing to spigots in Hillsboro.

Still, he added, patience and long-term visions are what’s needed for one of the state’s biggest, costliest and most important water projects to succeed.

“We’re trying to take a multi-generational approach to this,” Heidgerken said. “This new supply source, obviously, will still be serving the region long after most of us are gone.” 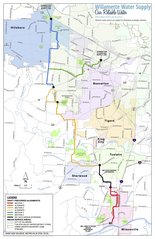 Although the line’s preferred route has now been chosen, much is left to do before construction actually gets underway in 2020, he said.

TVWD and the city of Hillsboro, the two partners in the estimated $1 billion project, will seek further public comment before deciding on the route’s final alignment. Later this spring, for instance, all homes and businesses within 500 feet of the proposed line will receive information about the route and be invited to sign up for future mailings and open houses.

Some further tweaks in the route may be made to take advantage of the booming growth now unfolding across a swatch stretching from south Hillsboro to south Beaverton. Installing the pipeline at the same time new trenches are being cut to hold electrical cables and residential sewer lines could trim costs considerably.

One place such doubling up could come is in the Cornelius Pass area, where extensive new development is expected to take place south of TV Highway, she said. Another is in Tualatin, where a long-planned extension of SW 124th Avenue is gearing up.

“We’re trying to take a multi-generational approach to this,” Todd Heidgerken said. “This new supply source, obviously, will still be serving the region long after most of us are gone.”

Officials from both partner agencies say they have heard very little in terms of criticism of the new source itself – the Willamette River.

That’s markedly different from Wilsonville’s initial decision in the late 1990s to build a treatment plant adjacent to the river. Opponents at the time predicted a rash of public-health emergencies and launched an unsuccessful recall attempt against then-Mayor Charlotte Lehan.

Doubtlessly helping matters, Heidgerken said, is that the Willamette River treatment plant has maintained a near-spotless record since it began operations in 2002.

“An immense amount of data have been collected since then,” he said. “And, clearly, the excellent source of water they talked about to the community is what’s being delivered.”

Three cities along the pipeline’s route, Beaverton, Tigard and Tualatin, are all assessing whether to tap into the project. At least preserving that option wouldn’t be surprising, since a golden rule among water planners is that being to draw on multiple sources always trumps a limited supply.

“When it comes to water,” Steele said, “the more redundancy you have, the better off you are.”

So a project that began with 117 different possible alignment segments has been narrowed to a single preferred route. Heidgerken is confident that the plan is sound enough to let construction start on time.

“I look at this entire process as a funnel,” he said. “It starts as a wide-open process and gets narrower as it goes.”

He added, “We’re not at the bottom yet, but we’re getting there.”

Hillsboro, In the News, TVWD

...about the Willamtte Water Supply Program.

The scope of the work on Roy Rogers Road includes a 66-inch drinking water pipeline that is being installed in conjunction with road improvements. The overall pipeline project calls for the construction of an intake line that originates on the Willamette River in Wilsonville. Read more in TheTimes

The Willamette Water Supply Program is gearing up for construction of a water treatment plant designed to handle a maximum of 120 million gallons of water per day once it’s operational. The facility, which will be built off Southwest 124th Avenue in Sherwood, will be designed to treat Willamette River water pumped from Wilsonville, going…

The next phase of the Willamette Water Supply Program’s work to build a pipeline from Wilsonville to Hillsboro — which will allow a number of cities to use the Willamette River as a water source — includes construction on a few Wilsonville thoroughfares. Read the article in the Wilsonville Spokesman

Over the next couple of weeks, crews will tunnel beneath Highway 217 and Southwest Scholls Ferry Road. Anyone driving along Highway 217 at Scholls Ferry Road will probably notice some increased construction activity as crews begin work on a new pipeline for the Willamette Water Supply Program project. COURTESY MAP: WILLAMETTE WATER SUPPLY PROGRAM –…

When completed, the new system will provide drinking water to thousands of people in Washington County. WILSONVILLE, Ore. (KOIN) — In Wilsonville, the fall rains aren’t slowing down the work on the Willamette Water Supply Project.  Construction crews are driving equipment through mud, digging trenches and laying massive pipes.  “About 25% of the 30 miles of…

Road improvements, along with the installation of a 66-inch water pipeline, are planned. Long-anticipated roadway improvements to Southwest Tualatin-Sherwood and Roy Rogers roads will begin in Sherwood on Aug. 16. The Tualatin-Sherwood Road/Roy Rogers Road intersection with Highway 99W has a lot of traffic, especially during commute times and is expected to have more traffic…

Regional program constructs pipe through Arrowhead Creek Park,city to expand plant. In terms of completing improvements at Wilsonville’s WillametteRiver Water Treatment Plant, the next calendar year could be themost active yet. Click here to read more.

Planning commission gives go-ahead to build plant on 46 acres off 124th Avenue Sherwood has given the go-ahead for the construction of a new water treatment facility that will treat drinking water as it makes its way from Wilsonville to Hillsboro. On Dec. 8, the city’s planning commission unanimously approved the facility, which will be…

“Hillsboro Water carefully manages drinking water rates, and strives to ensure equity and affordability for all customers,” said Niki Iverson, director of the Hillsboro Water Department. “Water rates are designed so all customers pay their fair share based on how they use Hillsboro’s water system and how much water they use.” Read the article at…

Water supply program plans to seek approval to build a new water treatment plant in Sherwood. Ray Pitz,  Tuesday, August 25, 2020, The Times An ambitious pipeline project that will result in providing drinking water for those in the Tualatin Valley Water District, along with residents in the cities of Beaverton and Hillsboro, is moving…

The Willamette Water Supply Program is committed to making our program information accessible to everyone. For questions, assistance or accommodations, please contact us at 503-941-4570 or info@ourreliablewater.org.