It’s one of 39 projects nationwide that the Environmental Protection Agency has encouraged to seek money from a program created by Sen. Jeff Merkley; Portland also invited; $6.3 billion total is available in third round.

Beaverton has been invited to apply for a $58 million federal loan to help pay for water system improvements.

Beaverton’s proposed work is among 39 projects in 19 states, including a $554 million plan from Portland, invited by the Environmental Protection Agency to seek a share of $6.3 billion available this year under the Water Infrastructure Finance and Innovation Act.

Although there is no guarantee, an EPA statement says: “An invitation to apply indicates that EPA believes the selected projects will be able to attain WIFIA loans.”

The EPA loaned money under this same program to the Tualatin Valley Water District and the city of Hillsboro, which received a total of $640 million, repayable by water customers, for construction of the $1.2 billion Willamette Water Supply Program. When completed in 2026, the regional program will draw from the Willamette River as a backup source of water to the district and several cities, including Beaverton, which joined earlier this year.

Hagg Lake is the primary source of water for much of Washington County, but seismic concerns about Scoggins Dam — which is under study by the U.S. Bureau of Reclamation — have led local governments to develop another water source if there is a severe earthquake off the Oregon coast.

“We are committed to ensuring a safe and reliable water supply for our growing community,” Mayor Denny Doyle said in a statement. “This is a positive next step in our efforts toward critical water infrastructure improvements that will enhance resiliency for our customers and the greater region. We appreciate the opportunity to participate in the application process.”

U.S. Sen. Jeff Merkley, D-Oregon, was the chief sponsor of the law that was signed in December 2016 to create the loan program.

“Oregon’s leaders deserve a tremendous share of the credit for this progress,” he said in a statement. “Their persistence in brainstorming solutions ultimately led to the creation of this program. As these water infrastructure projects show, persistence is already is paying huge dividends for our communities here in Oregon — and for communities across the country.”

One is a 5.5-million-gallon reservoir on Cooper Mountain to match an existing reservoir built in 1994. Given population growth in the city, and on Cooper Mountain, city officials have said a second reservoir will be needed soon. The City Council has authorized $23.9 million in revenue bonds, repaid by water customers, for the project.

The other is a 24-inch intertie between Tualatin Valley Highway/Cornelius Pass Road and Southwest 209th Avenue. It is part of the Willamette Water Supply Program. Beaverton’s estimated share of the regional program intertie is between $3 million and $4 million, also to be paid by water customers.

In addition, the city estimates it will have to replace 28.4 miles of water pipes and 1,850 fire hydrants over the next 30 years.

“I know firsthand how important it is to find outside capital when a community needs critical infrastructure investments,” said Chris Hladick, EPA regional administrator for four states. “These drinking water projects in Oregon are important public health investments, so we’re pleased that Beaverton and Portland are included in this list of eligible communities.”

The Wednesday Groundbreaking for the 124th Avenue Extension and Willamette Water Supply Pipeline projects is cancelled due to anticipated inclement weather.

Construction for both the road and pipeline projects is scheduled to begin later this year and be completed in 2018. The Willamette Water Supply Program will fund the pipeline construction and a proportionate share of other project costs. Washington County’s Major Streets Transportation Improvement Program (MSTIP) will fund road construction work.

The County’s $30 million road project will construct a new two-lane arterial between Tualatin-Sherwood and Grahams Ferry roads. Safety improvements will also be made to sections of Tonquin and Grahams Ferry roads, totaling 4.4 miles of new and/or improved roadway. The roadway extension is designed to provide another route connecting Tualatin and Wilsonville, along with access to land designated for future industrial and employment development in the cities of Tualatin, Sherwood, and Wilsonville, including the Basalt Creek area. For more information about the 124th Avenue Extension Project, visit http://124thproject.com or call 503-846-7800.

Community leaders and staff will gather at the south side of Tualatin-Sherwood Road and SW 124th Avenue at 10 a.m. Wednesday, Sept. 16, to celebrate the groundbreaking of the upcoming roadway and pipeline projects.

A groundbreaking ceremony for one of Washington County’s newest thoroughfares, along with a major water project that will pipe Willamette River from Wilsonville to Hillsboro, is set for Wednesday, Sept. 16, at the south side of Tualatin-Sherwood Road and 124th Avenue.

The kickoff, which begins at 10 a.m., will celebrate construction of the south side of 124th Avenue, a $30 million road project that will build a new two-lane arterial between Tualatin-Sherwood and…

Wilsonville City Councilors unanimously voted Jan. 5 to sign a memorandum of understanding with the Tualatin Valley Water District and five metro area cities, a move that takes the city further down the road toward a new water treatment plant.

The agreement binds Wilsonville, the water district and the cities of Sherwood, Tualatin, Tigard, Beaverton and Hillsboro into a partnership that is aimed at producing a governance agreement by the end of 2016. The agreement would essentially spell out the details behind a future system of pipelines that would send Willamette River water from a new water treatment plant in Wilsonville to the participating cities.

“It’s adding time to our extended schedule and it’s paying for having the facilitator continue to work with us as we work on how to solve this really, really complex problem,” Wilsonville Community Development Director Nancy Kraushaar told Wilsonville City Councilors at their Jan. 5 meeting.

END_OF_DOCUMENT_TOKEN_TO_BE_REPLACED 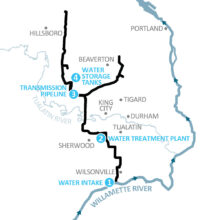