July’s proclamation encourages all Oregonians to use water wisely

“I am asking all Oregonians to do their part to use water wisely,” said Governor Brown. “Water is the foundation for local economies and ecosystems, and essential to the health and well-being of Oregonians. Drought is a slow moving disaster, adopting responsible water use practices now will help reduce the impact of drought for years to come.”

The proclamation cites as causes for concern the lowest statewide snowpack level on record; the third warmest average temperature from January to May in the past 121 years; and below normal rainfall. The proclamation also recognizes some climate scientists’ prediction that over the next 50 years Oregon is likely to lose most of its snowpack and become a rain dominated system.

In the effort to raise awareness of the dire conditions that Oregon faces this summer, Governor Brown’s office has created a website for more information, www.drought.oregon.gov, and launched the “#ORdrought” campaign. State agencies are using the website and the hashtag #ORdrought to keep Oregonians informed and prepared to adapt to drought conditions.

From an emailed news release issued from the office of Governor Kate Brown. 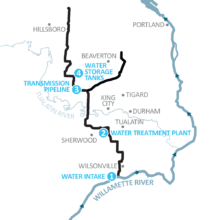 Road improvements, along with the installation of a 66-inch water pipeline, are planned. Long-anticipated roadway improvements to Southwest Tualatin-Sherwood and Roy Rogers roads will begin in ...