Why did the WWSP Pipeline East (PLE) alignment change from crossing through Beaverton north to Walker Road to the MPE_1.0 Scholls Ferry Road alignment ending at Hall and Oleson Roads and Beaverton-Hillsdale Highway at Western Avenue?
The Tualatin Valley Water District (TVWD) service area includes the Metzger area, which the previous PLE alignment would not serve. The PLE alignment was selected to serve the main TVWD service area. Completing the original PLE alignment would necessitate completing a separate TVWD project to serve Metzger. The new Metzger Pipeline East (MPE) alignment will meet TVWD’s needs for both areas with just one construction project. The project merges the already planned construction by TVWD into ongoing plans for the WWSS. Since this is a TVWD facility, Hillsboro's and Beaverton’s WWSS costs will remain unchanged.  The approach optimizes and maximizes operations through more efficiently utilizing existing TVWD facilities and infrastructure. This single pipeline approach is more cost effective than two separate pipeline projects, reduces environmental impacts, and minimizes impacts to the public.

If TVWD needs this alignment, why wasn’t it explored earlier?
TVWD planned a separate pipeline to serve Metzger but that wasn’t scheduled for construction until several years after WWSP’s completion in 2026. As part of its operations planning, TVWD updated its modeling for WWSP coming online and determined an opportunity existed to improve operations by moving one of the connection points for water distribution to be closer to the Metzger service area and began exploring the feasibility of combining the Metzger pipeline with the planned WWSP projects.

How will this pipeline connect to and increase water reliability in TVWD’s Metzger service area?
Metzger is isolated from the rest of the TVWD service area and is currently supplied water from a Portland Water Bureau connection. This connection will be replaced with a WWSS connection. The WWSS is being designed and constructed to withstand the impacts of a large earthquake or other natural disaster so that water service can be restored quickly, and so the community can recover sooner.

Scholls Ferry Road is a very busy arterial. How will you manage construction to reduce impacts to the travelling public? 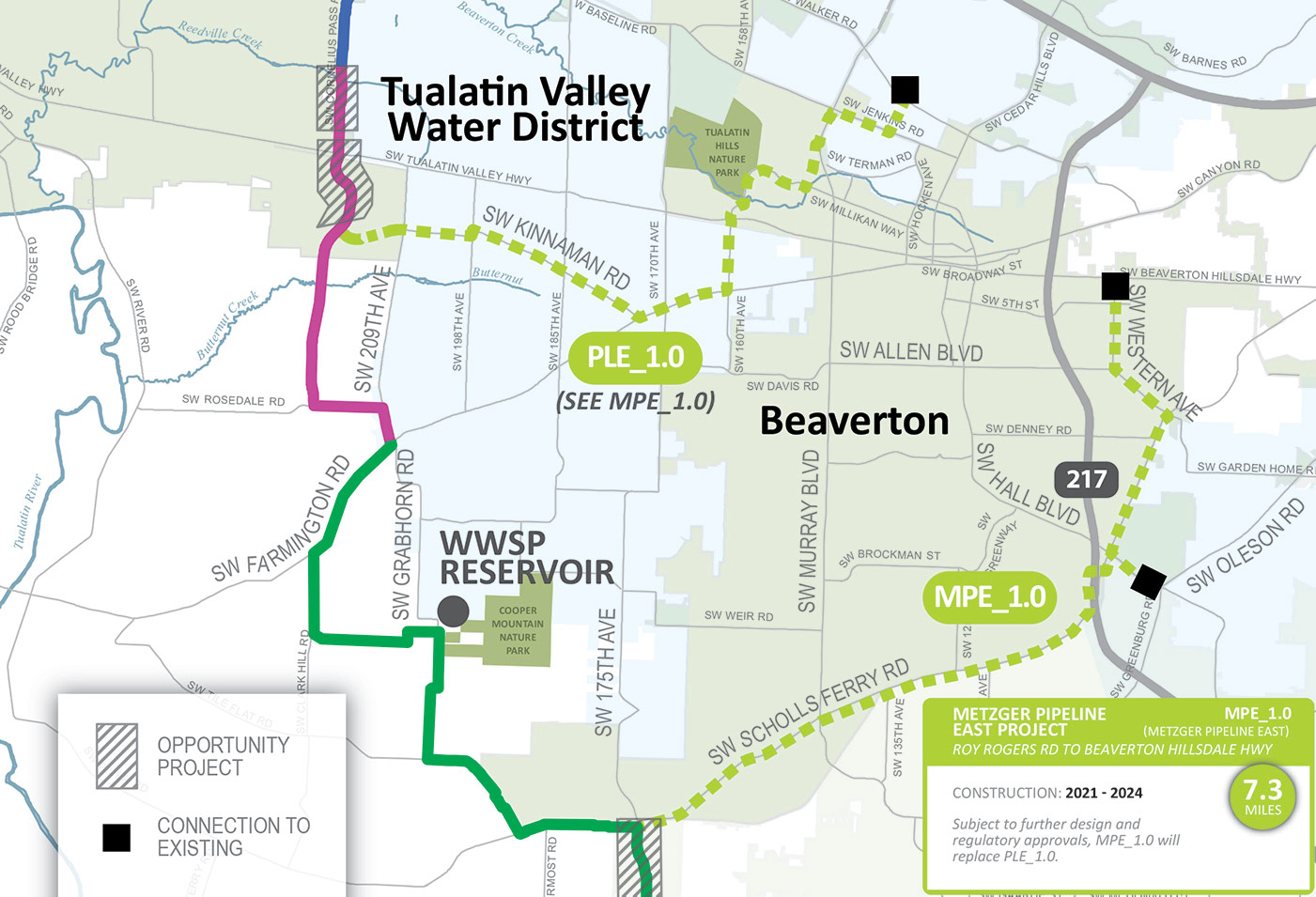 The new community is being built around Mountainside High School, across a state highway from Tigard's River Terrace. In the area, crews have ...

A $1.3 billion regional project scheduled for completion in 2026 will supply more for Hillsboro, be a backup source for Beaverton and enable the Tualatin ...

It's one of 39 projects nationwide that the Environmental Protection Agency has encouraged to seek money from a program created by Sen. Jeff Merkley; Portland ...